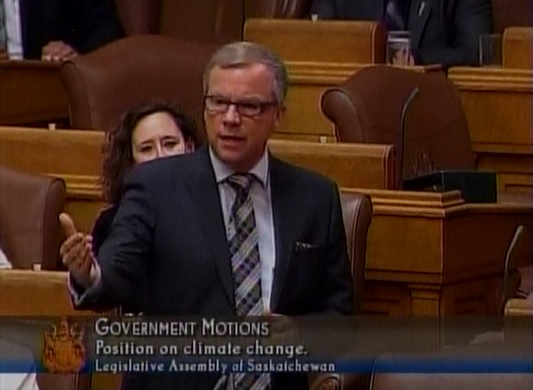 NDP MLAs failed to stand up for Saskatchewan by voting against the motion, effectively supporting the Trudeau carbon tax.

“Make no mistake - a carbon tax will harm thousands of Saskatchewan people making their living in industries that are disproportionately affected – agriculture, energy and mining,” said Premier Brad Wall after today’s important vote.  “Yet somehow, the NDP put their ideology ahead of the interests of Saskatchewan people and voted against the motion opposing the national carbon tax.”

“Even if it were ‘revenue neutral’, it is certainly not ‘sector neutral’ or ‘jobs neutral’” Wall said.  “It will impact Saskatchewan’s trade-exposed, carbon intensive industries and employment in those industries particularly hard.  What good is lowering income tax if you are out of a job?”

Unfortunately, the opposition NDP failed to stand up and join the government in fighting for Saskatchewan’s interests against the forced carbon tax.

“I was disappointed but not surprised that the NDP would put their party’s interests ahead of the province’s,” Wall said.  “But the NDP voted against this measure, joining with their NDP colleagues in Alberta and Ottawa in calling for carbon taxes.”

Recently, Premier Wall released the province’s White Paper on Climate Change which calls for investments in workable solutions to carbon dioxide emissions like Saskatchewan’s own world-leading Carbon Capture/Sequestration at Boundary Dam which is reducing emissions in the province to the equivalent of about 250,000 cars off the road every year.

“Rather than simply hit families and industries with another tax – especially at a time when these important sectors are reeling from low prices globally – our plan is shown to be working to reduce real emissions,” Wall said.  “A national carbon tax is the wrong approach - doing the most harm to the economy while having the least impact on emissions.”